You can also see our article on:

LG is serious about pushing the G5 and its modular design as the flagship of Android and nudging aside the Samsung Galaxy S7.
In contrast to recent years, LG appears to be stepping up its marketing around the G5 and making direct comparisons to the Galaxy S7. LG, Samsung's South Korean rival, is pitching the G5 as simply better than the Galaxy S7.
As the bakeoff among consumers begins, LG is busy courting journalists and reviewers. For instance, LG sent this infographic about how the G5 is better than the S7. LG needs consumers on board because the G5 won't have much of an enterprise following unless workers bring it to the office. Samsung has the business bases covered.
LG has also been actively promoting the G5 on social channels such as Twitter. Now this pitch from LG is hardly the trash talk I have to navigate between other vendors, but represents a bit of a departure from the usual politeness.
Clearly, LG's modular design with the G5 has stood out at Mobile World Congress 2016 in Barcelona. The LG G5 can now swap in various accessories as well as batteries. There's a camera grip and a HiFi module. 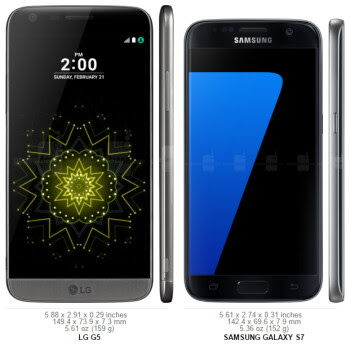 The unique selling point of the LG G5 is that it's modular. What I mean by this is that you can snap off the bottom "chin" piece of the smartphone and not only use this to replace the battery but also swap them out with a camera grip (which adds a shutter button, a zooming wheel, and bumps the battery up to 4,000mAh), and a HiFi module developed in collaboration with Bang & Olufsen that adds a digital-to-audio converter and a 3.5mm headphone jack. These are the only modules planned by LG, and on first blush they feel gimmicky.

The LG strategy vs. Samsung revolves around being modular and offering new innovation. Many Samsung rivals are going to dismiss the S7 and S7 edge as incremental upgrades with a dash of back-to-the-future features. Samsung listened to customers and brought back water resistance as well as a MicroSD slot.
What remains to be seen is whether tech buyers view the LG G5 as a bit gimmicky like Kingsley-Hughes does. Price will also matter. But LG thinks it has a hit on its hands with the G5 and isn't being shy about it. A reinvigorated LG and some G5 traction would represent yet another headache for Samsung as it defends a lead as the alpha Android device maker.

quite so many infromation LG sends out questionable G5 vs. Galaxy S7 infographic